There was a clear intention for this post – to show how great and frugal and fun making your own sausages can be.  Don’t get me wrong. It was fun. But, it took forever… The entire afternoon and into early evening to more exact.

I learnt a couple of vital life lessons last Saturday.

1. Don’t buy something on Amazon that looks like it’ll fit your KitchenAid. It was only £9. But that’s £9 of plastic nozzles that are realistically fairly useless for anything else. Unless you lot can come up with any suggestions (keep it clean chaps).

2. Check your equipment is set up properly and that you aren’t missing any vital parts. I discovered (only after I had finished) I was missing the blade from my grinder. This meant what would have been 10 – 15 minutes of turning the pork loin into mince into 2 hours of trying to shove it through the mincing holes without any form of cutting before it got to said holes. Two hours?!? You’d think I would figure out that something was wrong before that wouldn’t you…. Apparently not.

3. Poldark. Yes, I’m late to the party on this one, but it’s great. If you haven’t watched it, you should.

They say a picture says a thousand words… So, below, so you don’t have to read any more badly constructed sentences with too many … at the end; here is a little collage of my attempt at making sausages. Six hours and some nice tasting but really quite dry. sausages…. 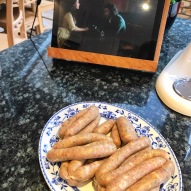